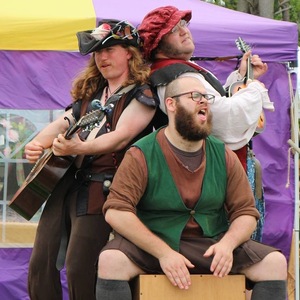 For the fifth consecutive year, Club Passim will host “NEFFA Night,” a showcase of a few of the excellent performers playing at the New England Folk Festival. The night will feature The King’s Busketeers, Zdravets, and The Vinegar Flies.

THE KING'S BUSKETEERS are a high-octane folk & traditional band that began in the shady forest of King Richard’s Faire in Carver, MA sometime in Fall of 2012. Since then, TKB have been rousing and entertaining the kindly citizens of Massachusetts and Rhode Island with hearty, soulful, traditional tunes alongside wistful ballads, whimsical ditties about double homicides, and a sprinkling of rollicking originals. Always energetic and full of equal parts talent and sparking chemistry, there’s never a dull moment when the Busketeers are out in force.

ZDRAVETS is a Boston-based ensemble which has been performing traditional music from Bulgaria and the Former Yugoslav Republic of Macedonia since 1989. This village music is the wild ancestor of the music that modern composers have tamed and adapted for large choral ensembles. Bulgarian music is characterized by highly resonant, close harmonies and energetic asymmetric rhythms. The vocal styles are free, full, and thrilling, while the instrumental music makes your feet itch to dance. ZDRAVETS brings you the whole gamut – instrumental music, unaccompanied voices, and the full ensemble combining instruments with voices.

The NEW ENGLAND FOLK FESTIVAL ASSOCIATION (NEFFA) is a non-profit educational and cultural organization, incorporated under the General Laws of Massachusetts to encourage, sponsor and preserve high standards of performance of the folk arts and traditions in New England and elsewhere.