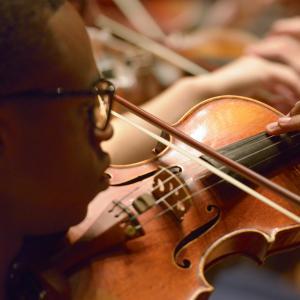 Michael Abels | "Delights and Dances"
Black American composer Michael Abels was born in Arizona in 1962 and grew up on a farm in South Dakota. His compositions include award-winning scores to the films “Get Out” and “Us.” His 2007 work, “Delights and Dances” for string quartet and string orchestra, was written for the Harlem String Quartet. Filled with blues, bluegrass, and Latin dance elements, it’s a brilliant showcase for the string quartet and, as its title suggests, an infectious romp for all.

Chen Yi | "Shuo"
Chen Yi was born in 1953 to a family of medical professionals and amateur musicians. Her education was interrupted by the Cultural Revolution, when she spent two years working in rural China. There she was exposed to Chinese folk music. Her compositions often explore the territory between traditional Chinese music and Western modernism. Shuo means “initiate” in Chinese; it also refers to the first day of each lunar month. Thus, the initial materials of the piece come from Chinese folk music: a mountain song for the opening viola solo and later a lyrical melody from the Shui people of southwestern China. These are developed in rich contrapuntal fashion.

Antonin Dvořák | Serenade in E Major, Op. 22
Thirty-three year-old Antonín Dvořák, struggling for recognition and the means to feed his young family, was the happy recipient of a stipend from the Austrian government in early 1875. Among the judges awarding the prize was Johannes Brahms. That spring, Dvořák wrote his Serenade in E major, Op. 22 in just two weeks. Full of the Bohemian atmosphere that forms the bedrock of Dvořák’s style, the music unfolds in five concise movements. Dvořák’s astonishing melodic gift is on display in all five, as is his sophisticated handling of the small string ensemble. The work significantly enhanced Dvořák’s growing reputation and has remained one of his most popular pieces.