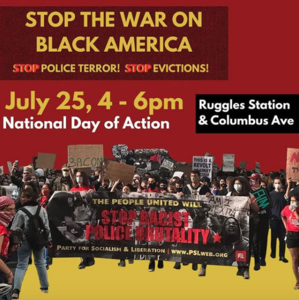 Stop the war on Black America! Stop the Evictions and Police Terror!

Join the Boston branch of the Party for Socialism and Liberation on, Saturday, July 25th at Ruggles station for a National Weekend of Action to demand “Stop Evictions and Foreclosures, Cancel the Rents & End Racist Police Terror!” Protestors will wear face masks and adhere to social distancing guidelines.

With more than 50 million people having lost their jobs, a wave of evictions and foreclosures is beginning to sweep the country. The number of homeless is growing. Instead of providing real relief the government is unleashing police departments to evict people from their homes, harass the homeless and continue to carry out routine acts of violence and brutality in Black, Latino and Indigenous communities.

Since the brutal May 25 police murder of George Floyd by the Minneapolis police department millions of people have participated in thousands of demonstrations in every state to demand an end to racist police terror and the immediate defunding of police departments. This national revolt against racism is taking place within the context of the unfolding economic depression.

Right here in Boston we have victims of racist police state terror that have yet to receive justice. We have a fight here. We have victims of police brutality and terror such as Terrence Coleman, Dennis Reynoso, Ross Batista, Burrell ‘Bo’ Ramsey-White, and Usaamah Rahim. The families need justice and the killer cops should be held accountable to the fullest extent of the law for their senseless murders. Jail all killer cops! We demand that Rachael Rollins re-open ALL the past cases of police brutality and murder in Massachussetts!

Over 44 million people in the United States have now filed for unemployment benefits, 30% of homebuyers missed their June housing payments and at least 20 million tenants could not pay their rent. People are being evicted from their homes while at the same time the COVID-19 pandemic is surging and we are being told to “stay home!”

Join us in demanding an end racist police terror, an end to evictions, and an end to foreclosures! Visit canceltherents.org to find an action near you!

25/07/2020 16:00:00 25/07/2020 18:00:00 15 National Day of Action! Stop Evictions and Police Terror! Stop the war on Black America! Stop the Evictions and Police Terror! Join the Boston branch of the Party for Socialism and Liberation on, Saturday, July 25th at Ruggles station for a National We... Ruggles Station and Columbus Ave, Boston, MA 02120 Organizer Organizer e-mail false DD/MM/YYYY Reddit