Nathaniel Philbrick — Travels with George: In Search of Washington and His Legacy 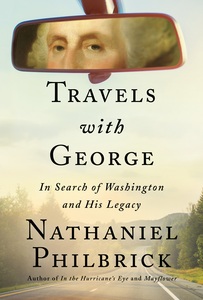 Join the Boston Public Library, American Ancestors/NEHGS, and the GBH Forum Network for an online conversation with Nathaniel Philbrick, celebrated author of Mayflower, In the Heart of the Sea, In the Hurricane’s Eye, about his latest work revealing the dynamic history of the United States. Ryan Woods, Executive Vice President and Chief Operating Officer of American Ancestors and New England Historic Genealogical Society (NEHGS), will moderate.

This program will happen over Zoom webinar. People who are interested in attending are kindly asked to register at the following link: https://wgbh.zoom.us/webinar/register/4916270623377/WN_WBEwaTM5R9-ZGcRM7tuGkw.

Does George Washington still matter? Bestselling author Nathaniel Philbrick argues for Washington’s unique contribution to the forging of America by retracing his journey as a new president through all thirteen former colonies, which were now an unsure nation. Travels with George: In Search of Washington and His Legacy marks a new first-person voice for Philbrick, weaving history and personal reflection into a single narrative.

Written at a moment when America’s founding figures are under increasing scrutiny,Travels with George grapples bluntly and honestly with Washington’s legacy as a man of the people, a reluctant president, and a plantation owner who held people in slavery. At historic houses and landmarks, Philbrick reports on the reinterpretations at work as he meets reenactors, tour guides, and other keepers of history’s flame. He paints a picture of eighteenth century America as divided and fraught as it is today, and he comes to understand how Washington compelled, enticed, stood up to, and listened to the many different people he met along the way–and how his all-consuming belief in the Union helped to forge a nation.

"Washington, as portrayed by Philbrick, is an impressive figure who knew that he was a national icon, but this did not go to his head. . . . Though some histories of the era treat slavery as an unfortunate footnote, Philbrick does not shy away from pointing out its evils. When he cuts back to the present, roads and accommodations improve, and he encounters monuments, museums, and local historians who describe details of Washington’s visit and, more often than not, disprove a popular myth." —Kirkus Reviews

To order this book from a local independent community bookstore partner, Porter Square Books, please visit this link to their website: https://www.portersquarebooks.com/book/9780525562177.

Nathaniel Philbrick is an American author and a winner of the National Book Award for his work of maritime history, In the Heart of the Sea: The Tragedy of the Whaleship Essex. He has written extensively about sailing. His works include The Passionate Sailor and Second Wind: A Sailfish Sailor’s Odyssey. Philbrick is also the editor of Yaahting, A Parody. He is the director of the Egan Institute of Maritime Studies and is a research fellow at the Nantucket Historical Association. Philbrick is a former intercollegiate All American sailor and North American Sunfish champion. He has also written articles on sailing and American maritime history for Vanity Fair, The New York Times Book Review, The Wall Street Journal, The Los Angeles Times and The Boston Globe. In 2002, Philbrick was named the Nathaniel Bowditch Maritime Scholar of the Year by the American Merchant Marine Museum. He is presently at work on a book about the Battle of Little Big Horn. To learn more about Philbrick, visit this link to his website: https://www.nathanielphilbrick.com/.

Reddit
23/09/2021 18:00:00 23/09/2021 19:00:00 America/New_York Nathaniel Philbrick — Travels with George: In Search of Washington and His Legacy Join the Boston Public Library, American Ancestors/NEHGS, and the GBH Forum Network for an online conversation with Nathaniel Philbrick, celebrated author of Mayflower, In the Heart of the Sea, In ... Boston Public Library (Online), Boston, MA 02116 false DD/MM/YYYY