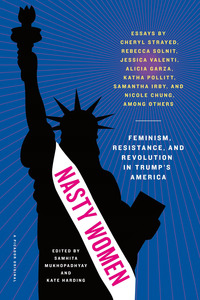 The 2016 election of Donald Trump to the presidency was a devastating blow to the country’s marginalized populations—immigrants, Muslims, the LGBTQ community, and Black Americans, to name a few. Intersecting with each of these groups were women, who despaired as their rights as equal citizens were called into question. Women of all walks of life bore witness as one of the most qualified candidates in history, Hillary Clinton, lost to an inexperienced reality star and real estate mogul who boasted about his predatory behavior.

Has the country become more misogynistic, or simply shown its true face? If 53% of white women voted for Trump and 94% of black women voted for Hillary, can women unite in America? Can we conceive of “women” as a cohesive group? In the face of overwhelming challenge, how can we work together to persist, resist, and enact lasting change?

These are some of the questions addressed in Nasty Women, an anthology of original essays from leading feminist writers on protest and solidarity. Editors Kate Harding and Samhita Mukhopadhyay will address what it means to be a woman in the Trump era.

Kate Harding is the author of "Asking for It: The Alarming Rise of Rape Culture—and What We Can Do About It," which was chosen as a finalist for the Minnesota Book Award and as the freshman read for Tulane University’s class of 2020. She is also a co-author (with Anna Holmes and Amanda Hess) of "The Book of Jezebel" and, with Marianne Kirby, of "Lessons from the Fat-o-Sphere." In 2007, she founded the popular body image and self-acceptance blog Shapely Prose, and her writing has appeared in The Guardian, the Los Angeles Times, U.S. News and World Report, Cosmopolitan, Salon, Jezebel, and Mic, among other publications. She is currently Assistant Director of the Women’s Resource Center at Cornell University and lives in Ithaca, NY.

Samhita Mukhopadhyay is a writer, editor, speaker, and technologist living in NYC. Currently the Editorial Director of the Identities vertical at Mic, she is also the former executive editor of the award-winning blog Feministing.com and author of "Outdated: Why Dating is Ruining Your Love Life." Her writing has appeared in The Nation, The American Prospect, The Guardian, Alternet, Talking Points Memo, New York Magazine, and Al Jazeera.

Registration begins October 4 at 9 am.