Naeem Mohaiemen | A Missing Can of Film 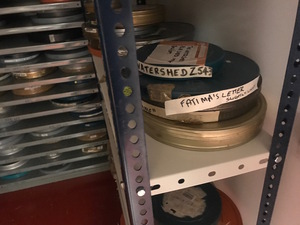 In December of our war year, a Communist filmmaker disappeared. Later, a rumor circulated: He was making a different war film, embarrassing to our own side. He had left behind a 16 mm film, hidden inside a can of cooking flour. It may not have been the enemy army that killed him.

Mohaiemen’s work over the last decade has included a search for mirages such as this missing film canister. At the inflection point of digital dystopia, we still attach hope onto the analog. The revealed futility of these quests leads to new stories to take away the bitter.

Naeem Mohaiemen combines essays, films, drawings, and installations to research left insurgencies and incomplete decolonizations– framed by Third World Internationalism and World Socialism. Despite underscoring a left tendency toward misrecognition, a hope for a future international left, against current silos of race and religion, is a basis for the work. He is author of Prisoners of Shothik Itihash (Kunsthalle Basel, 2014), editor of Chittagong Hill Tracts in the Blind Spot of Bangladesh Nationalism (Drishtipat, 2010), co-editor (w/ Lorenzo Fusi) of System Error: War is a Force that Gives us Meaning (Sylvana, 2007) and co-editor (w/ Eszter Szakacs) of Solidarity Must be Defended (Tranzit/ Van Abbe/ Salt/ Tricontinental, forthcoming). Naeem was a Guggenheim Fellow, and was shortlisted for the 2008 Villem Flusser Award (for the essay “Fear of a Muslim Planet: Islamic roots of Hip-Hop,” Sound Unbound, MIT Press) and the 2018 Turner Prize. His work recently exhibited at SALT Beyoglu (Istanbul), Mahmoud Darwish Museum (Ramallah), Tate Britain (London), Vasas Federation of Metalworkers’ Union (Budapest), MoMA PS1 (New York), Abdur Razzaq Foundation (Dhaka), and documenta 14 (Athens/Kassel). He received his PhD in Anthropology at Columbia University.