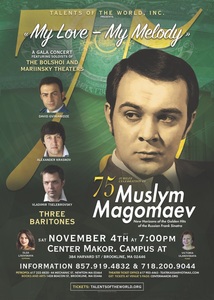 The Project "My Love - My Melody", conceived and implemented by Talents of the World Foundation's President and Artistic Director, David Gvinianidze, is a tribute to the talent of a legendary artist, Muslym Magomaev. Leading soloists of the State Academic Bolshoi Theater of Russiaand Mariinsky Theater will take part in this concert tour. While the concerts will once again conquer the audiences on the tour throughout Russia this fall, the performances will become a real revelation for American audiences.

Performed by artists, whom even the strictest critics attribute to the best baritones of the modern age, the golden hits of the "Russian Frank Sinatra" will receive a new life and will shine with new diamond facets, delighting audiences throughout the U.S. and the world.

DAVID GVINIANIDZE is the author and artistic director of the project, a performer widely known to the public of Europe, Asia and the United States alike; Winner of the Star of Glory on Star Stage in Moscow, the gold medal For Patronage and the UN Gold Medal For Contribution to the Development of Art, the Order of the Ruby Cross of Glory, and the Honorable Letters of the President of the Russian Federation and the Minister of Culture of the Russian Federation For the Great Contribution to the Russian Art.

VLADIMIR TSELEBROVSKIY, hon. Art. The Republic of Karelia is the soloist of the Petersburg-Opera theater, the invited soloist of the Mariinsky Theater, took part in opera productions in Cyprus, actively participates in concerts and festivals in Russia and Europe.

The Program will include Muslym Magomaev's greatest hits, such as:

From Frank Sinatra's repertoire, American and International Hits: "Love Story", "My Way", "Moon River", "Strangers in the Night", "Parapluies de Cherbourg", and many others.