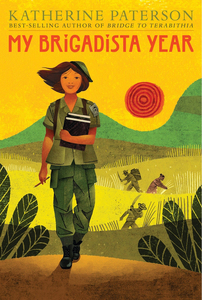 In her new historical novel, Katherine Paterson tells a moving coming-of-age story, shedding light on a little-known moment in history. Inspired by true accounts, the narrative follows a Cuban teenager as she volunteers for Fidel Castro’s national literacy campaign and travels into the impoverished countryside to teach others to read, sharing in the danger posed by counterrevolutionaries hiding in the hills nearby. The novel includes an author’s note and a timeline of Cuban history.

Katherine Paterson, a two-time winner of the Newbery Medal and the National Book Award, has written over thirty books and received numerous accolades, including the Hans Christian Andersen Award, the Astrid Lindgren Memorial Award, and the Laura Ingalls Wilder Award. A former National Ambassador for Young People’s Literature, Paterson is well known for her work in promoting literacy in the United States and internationally, and in 2000 the Library of Congress named her a Living Legend.

The program fee is for participants ages 5 and up and includes first-floor admission for non-members.

Registration begins October 5 at 9 am.