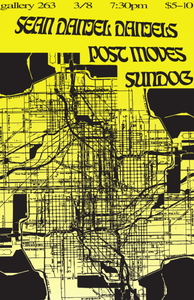 Sean Daniel Daniels (aka Bad History Month) – https://fathistorymonth.bandcamp.com/album/dead-and-loving-it
“Every Boston band starts in a basement, but not every Boston band hopes to leave one. Bad History Month, a glum anti-folk act that formed there back in 2007, has never been concerned with fame. For starters, the band’s music uses a combination of ribald jokes, effervescent self-deprecation and blunt existentialism focused on understanding oneself from the inside out in service of isolation — assuming the position of the middle school loner in the back of a classroom.” – NPR

Sundog – https://sundogsongs.bandcamp.com/album/the-measured-mile
“A treasure of an album. 16 curiously chorded indie-folk-rock something tunes, beautiful and strange. Jonathan Nankof runs the very excellent Erased Tapes, which has been quiet this year, but thankfully he did release The Measured Mile, which he also created and wrote. Melancholy comes seeped into the cracks of these songs, so even when the sun shines, it doesn’t shine too brightly. For me “Teach Me No Thing” is a stand out. A meandering track, the melody and song structure are a real ride that I’ve taken on repeat. “Rotary” kills me every time too. I hear a New England lineage to this variety of folk pop. Just a wicked lovely album.” – Boston Hassle

Post Moves – https://postmoves.bandcamp.com/album/boogie-night-at-the-edge-of-town
“Cosmic is a better qualifier than any to describe the peculiar lyrics and the tendency to drift into the ether that make Post Moves debut record, Boogie Night at the Edge of Town, such a compelling listen. Though Wenc’s intricate web of glistening guitar work is the most immediately inviting element of the record, it’s his offbeat stories about bummed-out surfers and mysterious grifters that provide direction for Boogie Night’s many strange twists and turns. ” – Willamette Week