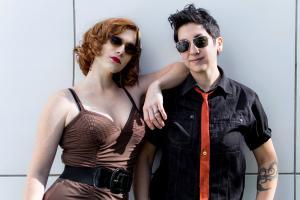 Mouth of Babes is playing Club Passim in Cambridge, MA on Sunday, November 5th at 7 PM. With more than a dozen albums and over a thousand shows between them, Ty Greenstein and Ingrid Elizabeth of Mouth of Babes are no strangers to the contemporary folk music scene. For years, their respective bands Girlyman and Coyote Grace captivated thousands of loyal fans as they criss-crossed the country. Now, as Mouths of Babes, Ty and Ingrid have distilled the very best of the songwriting, musicianship, and humor of their previous groups into a new duo that brings more style and depth than ever before. Mouths of Babes recorded their highly anticipated first full-length album, Brighter In the Dark at Prairie Sun Studios in northern California last summer. Released in January 2017, the self-produced album contains twelve original songs with contrasting themes of light and dark, tragedy and comedy, personal and political. They easily switch off lead vocals and play a wide array of instruments, with Ty on acoustic and electric guitars and foot percussion, and Ingrid playing upright bass, ukulele, and cajon. Tickets are on-sale now at www.clubpassim.org.