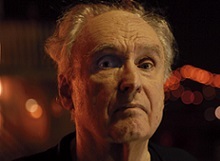 Frank Bidart is the author of numerous collections of poetry, including Half-Light: Collected Poems (2017), Metaphysical Dog, which won the 2013 National Book Critics Circle Award and was a finalist for the National Book Award. His other books include Watching the Spring Festival, Star Dust, Desire, a finalist for the Pulitzer Prize, and In the Western Night: Collected Poems 1965—90. He is also the co-editor of the Collected Poems of Robert Lowell. His many awards and honors include the Wallace Stevens Award, the Bollingen Prize, the Shelley Award from the Poetry Society of America, and The Paris Review’s first Bernard F. Conners Prize for “The War of Vaslav Nijinsky” in 1981. From 2003 to 2009, Bidart served as a chancellor of The Academy of American Poets.

The reading is sponsored by the Harvard University Department of English. Books will be sold at the event.