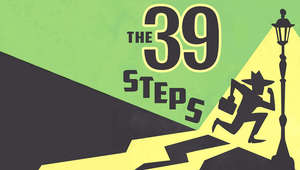 Get discounted $25 tickets with this link:

Moonbox Productions, nominated for numerous IRNE and Elliot Norton Awards, is thrilled to present the hilarious comic thriller, The 39 Steps, by Patrick Barlow and John Buchan. Alfred Hitchcock and Monty Python collide in this hilarious, madcap spy-melodrama-turned-comedy. Richard Hannay is just an ordinary man living a quiet life… until he meets Annabella Schmidt, a beautiful woman with a mysterious past. When Annabella is murdered in his apartment, Richard becomes the target of both a nationwide manhunt and a nefarious ring of spies. Meet a cast of more than 150 characters (played by just four actors), witness a series of death-defying leaps (all from short distances), and behold a myriad of dazzling special effects (on a limited budget) in this unforgettable tale that makes both adventure and romance more absurdly enjoyable than ever before.