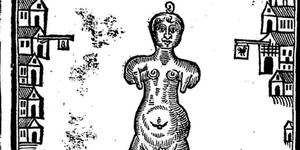 Women in 17th century Boston healed the sick and cared for the wounded. They alone served as midwives, overseeing the dramatic, life-or-death moment of childbirth. In this way, women had a great deal of power.

But their power was only in private. In public, women were powerless. They could not vote, speak in public, hold property, hold public office, or sign legal documents.

And even in private, women were often suspected of threatening the social order. Midwives, who were widely respected, were frequently blamed if things went wrong, such as when “monsters” were born, with birth defects, or babies or mothers died. Governor John Winthrop, for instance, described a stillborn with congenital defects as having “horns and claws [and] scales,” and causing the bed to shake. To him this was evidence that the infant’s mother or midwife were witches, allies of the Devil.

Join renowned historian Eve LaPlante as she guides us into the world of midwives, female healers, and “monstrous births.” Learn how Puritans viewed women’s power and women’s bodies, in this life and in the afterlife.