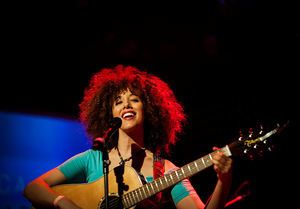 We are thrilled to have Monica Lionheart playing on the Beat stage again.

“Singer-songwriter Monica Lionheart layers her frosty voice over wafts of electronica and strings in a manner that suggests dry ice—and lots of it—plus Sigur Rós, and early Cure records interpreted by a tropicalia singer. It’s gorgeous stuff, in other words.” - Timeout Magazine

Monica Lionheart, is an American electro-acoustic, singer-songwriter, producer, DJ and multi-instrumentalist. She began her music career as a member of Iluminada, was the founder of the electronic rock band Zigmat, and collaborated in Pacha Massive before forming her own solo project in 2012.

Lionheart's Indian Summer was released in April 14, 2012 by Nacional Records and was well received by critics in the U.S. Produced by Alon Leventon and Lionheart, the songs feature Lionheart's acoustic guitar in straightforward arrangements. Music videos were released for the album's songs "Escape Strategy", "Let Go", "Rock to Ankles" and "Relampago" which went into MTV and VH1's rotations and received features in Latina Magazine, Remezcla and Billboard Magazine.
One of Indian Summer's two Spanish tracks, "Relampago" was used in an episode of the HBO Latino series Capadocia. During this period Lionheart has also worked instrumental music for various commercials, taught, toured and organized music workshops at colleges and universities such as STUK in Belgium, Midi Station, in Brussels and throughout the world with the band Dizzy Ventilators.