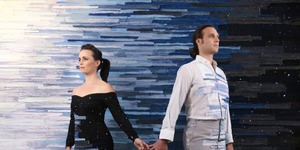 Check out a show at legendary folk club, Club Passim, in Harvard Square. Established and up-and-coming bands and singer songwriters alike perform at this Cambridge gem. Don't miss your chance to see the vivacious, infectious songs of Goodnight Moonshine, and the searing, politically relevant and poignant ballads of Letitia VanSant.

When you first hear Goodnight Moonshine it brings a wave of nostalgia, conjuring teenage heartache- then perhaps a similar sensation to falling deeply in love. As the music fades you’re left grappling with what it is to stay in love with something both beautiful and flawed. Courageous unveiling and depth of experience make the collaboration between married couple Molly Venter and Eben Pariser addictively captivating.

From sparse indie folk ballads to hard-hitting Americana anthems, Letitia VanSant’s distinctly intimate voice delivers songs that are both deeply personal and politically relevant. Whether performing as a duo or with her all-star four-piece band, her live shows have been described as “vibrant and approachable.” VanSant’s songwriting has earned numerous awards, including the Kerrville New Folk Songwriting Competition, an honor shared among the likes of Lucinda Williams, Lyle Lovett, and Anais Mitchell.