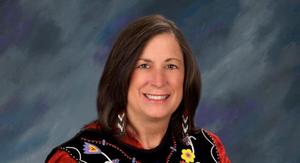 The Strauch-Mosse Visiting Artist Lecture Series welcomes Chief Mutáwi Mutáhash (Many Hearts) Marilynn “Lynn” Malerba, 18th Chief of the Mohegan Tribe who will discuss how colonization and subsequent United States Policy has affected our Indigenous nations and how our sovereign tribal nations engage with the sovereign that is now the United States. A Q&A will follow Chief Malerba’s talk.

Register in advance for this free, virtual event: https://cvent.me/4xrBrK

Lynn Malerba is the first female chief in the Mohegan Tribe’s modern history. She follows in the footsteps of many strong female role models in the tribe, including her mother, Loretta Roberge, who holds the position of tribal nonner (elder female of respect). Her great-grandfather, Burrill Fielding, also served as chief.

Prior to becoming chief, Malerba served in a number of roles with the tribe, including as chariwoman of the Tribal Council and executive director of health and human services for the tribal government.

Preceding her work for the Mohegan Tribe, Malerba had a lengthy career as a registered nurse, including a position as director of cardiology and pulmonary services at Lawrence & Memorial Hospital.