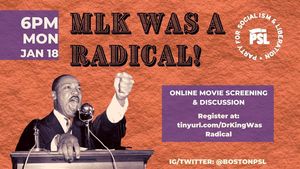 Dr. King’s legacy is often co-opted and whitewashed to portray him as a passive figure of the Black freedom struggle, when in reality, Dr. King played an active role in dismantling his conception of the three evils of our society: racism, poverty, and militarism. From being a vocal opponent of the Vietnam War, to the founding of the Poor Peoples’ Campaign and his participation in the Memphis Sanitation Workers’ Strike, it is necessary for activists and revolutionaries to deepen our understanding of the legacy of Dr. King and the implications it may have on our struggles for freedom today.

This 40 minute film - a segment from the PBS documentary series “Eyes on the Prize” - brings to life the radical politics Dr. King developed from the middle of his life up until his assassination in 1968.