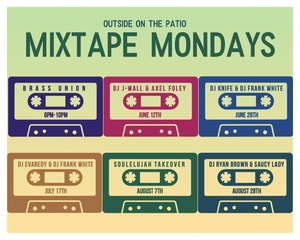 The events take place outside on the patio from 6-10pm bringing the club feel outdoors. The first party happens to co-inside with Brass Union’s third Anniversary on June 12th. To kick off the event J-Wall and DJ Axel Foley; who was the first DJ ever to spin at at Brass will play an open format night that leans into funk, soul, & classic hip hop.

The rest of the summer schedule is as follows: