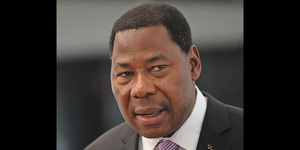 The seventh webinar in a seven-part series focused on various aspects of sustainable development in Africa.
Please register for this Zoom event at https://bit.ly/3C2OMCu

Featuring:
Thomas Boni Yayi – Former President of Benin
Thomas Boni Yayi is a Beninese banker and politician who was President of Benin from 2006 to 2016. He took office after winning the March 2006 presidential election and was re-elected to a second term in March 2011. He also served as the Chairperson of the African Union from 29 January 2012 to 27 January 2013. He received his education first in the regional capital of Parakou before moving on to earn a master's degree in economics at the National University of Benin. He then pursued an additional master's degree in economics at the Cheikh Anta Diop University in Dakar, Senegal, and then earned a doctorate in economics and politics at the University of Orléans in France and at Paris Dauphine University, where he completed a doctorate in economics in 1976.

Co-sponsors: MIT Center for International Studies (CIS), MISTI MIT-Africa Program, TRUE Africa University (TAU)
About the MIT X TAU webinar series:
The Center for International Studies (CIS) and the MISTI MIT-Africa Program has partnered with TRUE Africa University (TAU) to host its second annual webinar series focused on various aspects of sustainable development in Africa. Thursdays at noon EST, starting on March 3, TAU founder, MIT alumnus, and CIS research affiliate Claude Grunitzky, will interview the thinkers, shapers and doers who are impacting the future of Africa. Each webinar promises to be a genre-defining look into the opportunities and challenges facing the African continent and its people over the coming century.

Free & open to the public
Also watch it on YouTube.
MIT is committed to providing an environment that is accessible to individuals with disabilities. If you need a disability related accommodation to attend or have other questions, please contact us at english7@mit.edu.