Mill Talk: From Merchant Princes to Lords of Loom 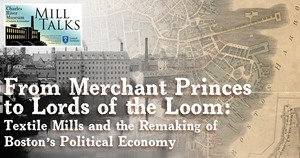 "From Merchant Princes to Lords of the Loom: Textile Mills and the Remaking of Boston's Political Economy" The rise of New England's textile industry with the development of the mills at Waltham and Lowell was a key transformative moment in the long history of Boston's economy and political relationships. For nearly two centuries, the city's wealth had depended on overseas trade, as Boston's merchants exported New England's humble agricultural products to the West Indies and beyond, in return for manufactured goods of all kinds. The rise of automated textile production quickly reoriented the city's economy toward the American South, where the raw cotton for the mills was produced by enslaved laborers on plantations, and where much of the cotton fabric rolling out of the mills was then sold.

This talk explores how the dramatic change in economy also transformed Boston and New England's political position within the United States. Mark Allen Peterson, recently named as the Edmund S. Morgan Professor of History, is a specialist in early North America and the Atlantic world. Peterson joined the Yale faculty in July 2018. He earned his Ph.D. in history from Harvard University, and taught previously at the University of Iowa and at the University of California-Berkeley, where he was chair of the Department of History. Peterson’s newest book, “The City-State of Boston: The Rise and Fall of an Atlantic Power, 1630-1865,” was published in April. He is also the author of “The Price of Redemption: The Spiritual Economy of Puritan New England.” He is at work on two new books for Princeton University Press. The first, “The Long Crisis of the Constitution,” offers a historical account of the U.S. Constitution as a political compromise based on 18th-century conceptions of power and property, and describes how the slow erosion of its original premises in the face of a changing U.S. population and economy have left the nation politically unmoored. The second, “Revolution’s Ends: A History of the American Revolution for the 21st Century,” is a new narrative history of the major conflicts of late-18th-century North America, designed to offer useful frameworks for understanding the processes that generated an independent and consolidated United States, in order to better grasp the prospects for the nation and its place in the world today. In addition to these current projects, Peterson is also planning a third volume of his New England trilogy, focused on the transformation of material culture, consumer demand, and public expenditure from the 16th to the 19th century. He is also completing an edited volume of the writings of John Hull, a 17th-century Boston merchant, mint-master, and political leader, for publication by the Colonial Society of Massachusetts.

Peterson also serves as co-editor for the book series “American Beginnings,” published by the University of Chicago Press.

*** The Mill Talks at the Charles River Museum of Industry and Innovation are free and open to the public and are made possible by the generous support of the Lowell Institute.

Advance registration is strongly recommended; we cannot guarantee that space will be available the night of the event.

13/11/2019 19:00:00 13/11/2019 20:30:00 15 Mill Talk: From Merchant Princes to Lords of Loom "From Merchant Princes to Lords of the Loom: Textile Mills and the Remaking of Boston's Political Economy" The rise of New England's textile industry with the development of the mills at Waltham an... the Charles River Museum of Industry and Innovation, Waltham, MA 02453 Organizer Organizer e-mail false DD/MM/YYYY Reddit