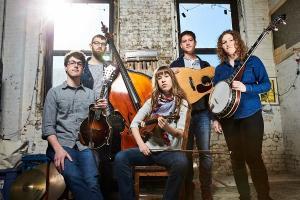 Since their formation in the fall of 2014, Mile Twelve has quickly been on the rise. They released their debut 6-track self titled EP, and performed extensively throughout the U.S., Ireland and Canada, including several major festivals; Grey Fox Bluegrass Festival, FreshGrass Festival, Wind Gap Bluegrass Festival and Joe Val Bluegrass Festival. A track from their debut EP was featured on Sirius XM Bluegrass Junction's "Hand Picked with Del McCoury", while another track was featured on Spotify's "Fresh Bluegrass" 2015 playlist. That same year, they were selected as formal showcase artists at the North East Folk Alliance. The summer of 2016 has held more milestones for this young group: opening for Tim O’Brien at the Station Inn in Nashville, winning the Podunk Bluegrass Festival Band Contest and being nominated for a Momentum Award by the International Bluegrass Music Association and adding a fifth band member: mandolin player David Benedict. This winter they will be heading into the studio in Nashville to record their debut full-length album with producer Stephen Mougin at the helm.