Mickalene Thomas and the Black, Queer Female Origin of the Universe 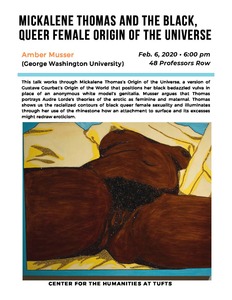 Where:
https://sites.tufts.edu/chat/event/amber-musser-mickalene-thomas-and-the-black-queer-female-origin-of-the-universe/ Center for the Humanities at Tufts
48 Professors Row
Medford, MA 02155

An academic talk followed by a light dinner.

Dr. Musser has published widely on race and critical theory, queer femininities and race, race and sexuality, and queer of color critique. She has an MSt in Women’s Studies from Oxford University and received her PhD in History of Science from Harvard University. She has held fellowships at New York University’s Draper Program in Gender Studies and Brown University’s Pembroke Center for Teaching and Research on Women. Her research has been supported by grants from the Ruth Landes Memorial Fellowship and the Arts Writers’ Grant from the Warhol Foundation. She previously taught gender studies at New York University and Washington University in St. Louis. She also writes art criticism for The Brooklyn Rail.