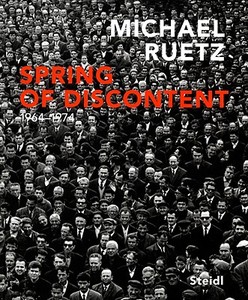 Unlike any other photographer, Michael Ruetz has captured the essence and mood of 1968 and the socio-political changes associated with the socalled ‘68 Movement. As a result, many of his iconic photographs have become part of our collective visual memory. His “photographic diary”’ depicts the protagonists of the period from Dutschke to Beuys, the Zeitgeist of the West German Bourgeoisie, as well as the staged public space of the GDR. Not only does he document the student revolts in West Berlin, butalso the political changes worldwide — in Portugal, Greece, Angola or Chile, for example, where the dynamics of liberation and emancipation erupted in street protests, artistic and political rallies.

Still, Ruetz is more than a mere documentalist of this period in time. He was part of the leftist ‘68 Movement. His images live from the proximity to the events, from a feeling for situations and a view of people: in the photographs, mainly black and white, the emotionality of this period of awakening and revolt at the end of the late ‘60s and early ‘70s comes to life again and emerges as an artistic signature of the events in Ruetz’ works.

Michael Ruetz was born in Berlin in 1940; his ancestors who stem from Riga worked as journalists and publishers. After finishing school in Bremen, Michael Ruetz began his
studies in Sinology, Japanology and Journalism. Along with his studies, Ruetz started to specialize in Photography.

From 1936 to 1975 he worked as a photojournalist for the German magazine Der Stern in Hamburg. Ruetz first became known through his coverage of the student protest in West Germany at the end of the ‘60s when international magazines such as Time and Life published his works on the APO-Movement (Extra-Parliamentary Opposition). His photographs of the protest movement are now part of German photographic history.

For more than ten years Ruetz has been a contract author for the publisher Little, Brown & Co./New York Graphic Society (Boston, Massachusetts). Until 2005, he was a professor of Communication Design
at Braunschweig University of Art (Hochschule für Bildende Künste). Michael Ruetz spent 13 years living and working abroad in Italy, the United States and Australia. He now lives in Berlin and is the Deputy Director of Film and Media Arts at the Academy of Arts (Akademie der Künste).