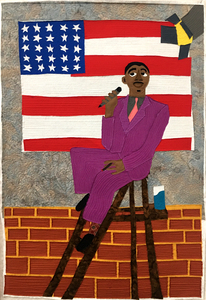 Meandering /mēˈandəriNG/ - definition: following a winding course.
​
A meander is a quilting design that is repeated to fill in an area. - Angel Walters, Free Motion Meandering: A beginner’s guide to Machine Quilting, C&T Publishing, Inc., 2017.
LaiSun Keane is pleased to present a solo exhibition of Michael C. Thorpe (b.1993) titled Meandering Thoughts on view at 460C Harrison Ave C8A, Boston MA from April 15 to May 29.
​
In February 2020, Michael C. Thorpe opened his breakthrough exhibition at All Too Human, a high fashion boutique located on Newbury Street Boston. It received critical and favorable response from the Boston art community and the public alike and a work was acquired for the MFA Boston's permanent collection. Early in the Covid19 pandemic, Thorpe moved to New York City to focus on developing his artistic career and at the same time, LaiSun Keane added Thorpe as a gallery represented artist which culminated in this exciting project.
​
This exhibition is a statement of Thorpe’s journey; a dream come true yet far from over. The works tell stories of his life through a dream-like lens with humor and introspect. Dreams of traveling to Japan, or to play pro basketball, an imagined excursion to space and humorous takes on his beer consumption and Dick Gregory’s 1968 Presidential run.
​
We are immensely honored to represent Thorpe and proud to have his first in person solo exhibition in Spring. His works have roots in American quilting which traditionally were made communally by women for utilitarian reasons. He also draws from Gee’s Bend quilting traditions of improvisation which bears heavy African influenced patterning. Confronting these traditions and narratives, he presents his unique image making through creative compositions of shapes and colors.
​
Michael C. Thorpe was born in New York and grew up in Newton MA. He graduated from Emerson College with a degree in photojournalism and was a basketball player for the college team. His work is in the collection of MFA Boston and this is his second solo exhibition with the gallery.