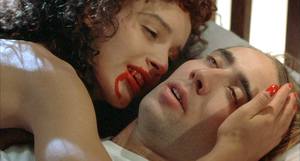 Join MFA Film for a screening of Robert Bierman's "Vampire's Kiss" (1989). The film stars Nicolas Cage as yuppie New Yorker Peter Loew, whose life revolves solely around making as much money and sleeping with as many women as possible. After a typical night of scouring trendy bars for some action, Peter manages to take home the sexy Rachel (Jennifer Beals), who bites him on the neck while they’re in bed. The next day, Peter is certain he is now a vampire. Though no one shares this belief and he hasn’t changed physically, he dons fake fangs and begins stalking women.

The screening is part of "On the Fringe: American Cult Films of the 1980s" at the Museum of Fine Arts, Boston, highlighting wildly creative independent films from the 1980s and early '90s that opened viewers' minds to new ideas: supernatural phenomena, otherworldly creatures and the countercultures thriving on the fringes of American society. The yearlong series began in January and jumps forward a year each month before concluding in December with a film from 1991.

The MFA's Film Program is recognized as one of the country's leading independent exhibitors of film, presenting more than 500 screenings of independent, foreign and classic films every year.

MFA members can get free tickets to every film in the yearlong series (plus hundreds of other screenings) by joining Friends of Film, a group that connects film lovers with other cinephiles through discussions and events: bit.ly/2hYLBB0