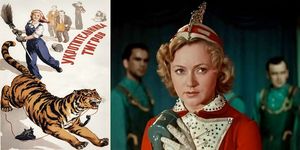 A beloved Soviet classic, Tiger Girl is about a young woman from a circus family who aspires to perform with tigers against the objections of everyone around her. The gentle Lena doggedly pursues her dream while her parents; her would-be boyfriend, Petya; and especially the acting tiger tamer try to stop her. When motorcyclist Fyodor joins the circus with a high-flying act, Lena agrees to serve as his assistant and the two prepare for a country-wide tour. But before they depart, Lena gets the opportunity of a lifetime—a chance to replace the fired tiger tamer. Despite her growing romantic feelings for Fyodor, Lena decides to chart her own path, quitting the motorcycle act to train with the tigers and leaving the dejected Fyodor no choice but to go on performing with another young woman. As Lena’s dangerous debut approaches, will her love—for the tigers and for Fyodor—prevail?

Filled with a rich tapestry of sound and fabulous performances, this charming and thoughtful film was co-directed by Nadezhda Kosheverova, who already had a notable filmography when Tiger Girl was released. After serving as assistant director for the influential Maksim trilogy in the 1930s, Kosheverova had numerous solo directorial credits dating back to 1937. Tiger Girl features the cinematic debuts of iconic actress Lyudmila Kasatkina and the legendary Soviet tiger tamer Margarita Nazarova, who served as Kasatkina’s stunt double and would later go on to be a film star herself.

The MFA is screening Tiger Girl in honor of International Women’s Day, historically celebrated more prominently (but also quite differently) in the USSR and in post-Soviet countries than in western Europe or the US. The screening is also part of the Mieczysław Weinberg: Through the Lens series, which presents Soviet films scored by the Polish/Russian/Soviet-Jewish composer Mieczysław Weinberg (aka Moisey Vainberg, 1919–1996).

Followed by a Q and A with David Patterson, professor of Music, UMass Boston; and Anna Winestein, executive director, Ballets Russes Arts Initiative.