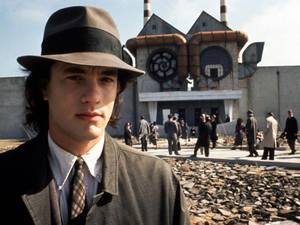 Join MFA Film for a screening of "Joe Versus the Volcano" (1990), starring Tom Hanks, Lloyd Bridges and Meg Ryan!

While it stars two well-known actors and was helmed by the Oscar-winning director of "Moonstruck" (1987), "Joe Versus the Volcano" was surreal and subversive enough to baffle mainstream critics and audiences alike. Hanks stars as Joe Banks, a miserable office worker who finds out he is dying. On the upside, a strange millionaire (Bridges) offers Joe a way to die with meaning and dignity: by hurling himself into a volcano. With plenty of spending cash and an ensemble of new luggage, Joe embarks on an absurdist journey to his demise, guided by two wildly different sisters (both played by Ryan). The result is a visually splendid and relentlessly bizarre film.

The screening is part of "On the Fringe: Indie Film in the 90s," a yearlong series at the Museum of Fine Arts, Boston showcasing a wide range of films from the 1990s that capture the spirit of independent film: bit.ly/2kAif03