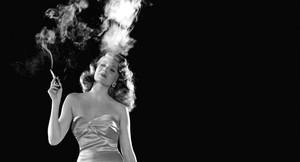 Rita Hayworth dazzles in her signature role as the glamorous Gilda, a casino owner’s wife in Buenos Aires who captures the heart of every man she meets. Vidor’s film turns the femme fatale trope on its head by constructing its heroine as complex, vulnerable, and often sincere—not the archetypal ice queen who exists only to cause the downfall of the male protagonist. Gilda’s reputation as a feminist noir can be attributed to Hayworth’s own unbridled charisma, which shines through in spades, giving depth and substance to her character. Hayworth was just one of many women who worked behind the scenes to shape the story, along with screenwriter Marion Parsonnet and executive producer Virginia Van Upp.

"Gilda" is part of "Femmes Fatales," a series tracing the evolution of the femme fatale archetype over nearly 90 years of great cinema, screening throughout March: bit.ly/2EcmdE2