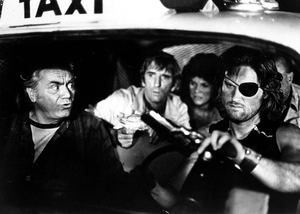 Join us at the Museum of Fine Arts, Boston for a special screening of "Escape from New York" (1981)—the final installment of MFA Film's yearlong series "On the Fringe: American Cult Films of the 1980s," as well as the opening film of the month-long retrospective "Harry Dean Stanton: Say Something True." Come early at 7:15 pm to grab a drink at Taste Café and enjoy live music by Animal Hospital!

This screening is co-presented with the Coolidge Corner Theatre and complements the Coolidge’s series honoring actress Adrienne Barbeau. In the month of December, bring a ticket stub from any December MFA Film screening to the Coolidge for a $3 discount on regularly priced feature films, subject to availability.

John Carpenter’s action classic "Escape from New York" conjures a world where crime in the United States has exploded, leading the government to turn the entire island of Manhattan into a high-security prison with no guards and no rules. When a group of extremists kidnap the U.S. President (Donald Pleasence) and hold him captive on the hellish island, the Feds recruit freshly convicted felon Snake Plissken (Kurt Russell) to rescue the president in exchange for Snake’s freedom. Harry Dean Stanton stars as Brain, a savvy inmate who has made the New York Public Library his personal fortress. Also starring Adrienne Barbeau, Ernest Borgnine, Lee Van Cleef and Isaac Hayes.