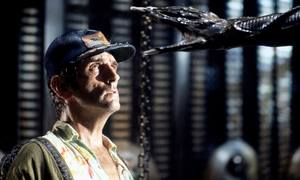 With a career spanning over six decades, Harry Dean Stanton was beloved for his weathered face, easy tenor voice, and candid approach to acting and life. Though his death in September was a blow to film lovers everywhere, Harry’s work is preserved in hundreds of films to be felt and appreciated by future generations. In December, MFA Film remembers this American legend with a survey of his acting work—in roles big and small: bit.ly/2hYJOhP

On December 29, join us for a screening of "Alien." Ridley Scott’s horror classic holds up as well now as ever, putting today’s slick sci-fi films to shame with the gritty, industrial realness of its interior sets. In one of his most iconic roles, Harry Dean Stanton plays engineer Samuel Brett, who saunters through the halls of the Nostromo with a dangling cigarette, taking the danger in stride.

In the month of December, bring a ticket stub from any December MFA film to Coolidge Corner Theatre for a $3 discount on regularly priced feature films, subject to availability.