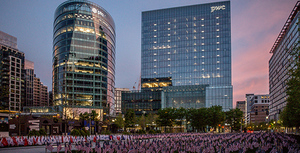 MFH Flag Garden will be on display on Seaport Common May 14th through May 31st to honor the memories of the Massachusetts men and women who served since September 11, 2001 and gave their lives for our nation. Seaport Common is home to the MFH Memorial, which will have a Rededication Ceremony on May 28th.

Be a part of the Mass Fallen Heroes community and their efforts to honor, support and empower veterans and their families, by donating today.