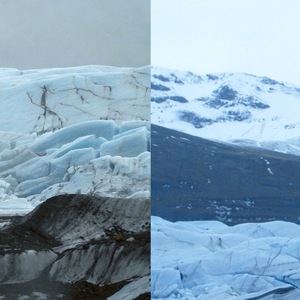 The Fort Point Arts Community Gallery is pleased to announce Melt, the second show of the 2018-2019 season, juried by Sam Toabe, Gallery Director of the University Hall Gallery at UMass Boston. Melt (January 28, 2019 – March 7, 2019) brings together the collaborative video, photographic, and sculptural work from Isabel Beavers and Laine Rettmer.

The artists created the collaborative project Melt during a residency at the Skaftfell Center for Visual Arts in Seydisfjordur, Iceland. The exhibition includes a body of video, photographic prints, and sculptural works that reinterpret Norse mythological origin stories through a feminist, science-fiction lens. In connection with Melt, Beavers and Rettmer will host a day-long workshop that explores media literacy and storytelling through the creation of video portraits. It will take place at the FPAC Gallery, 300 Summer Street, Boston, on Saturday, February 16, 2019 (10:00 am – 4:00 pm).

Beavers and Rettmer seek to formulate a process through which illusion and icon become a simulacrum of origin and truth and, in doing so, broaden a canon of origin stories based predominantly in the agency of male character. The artists created the works in Melt in response to Norse mythology and the phenomenological experience of the Icelandic landscape—integrating disparate visual lexicons to create new image-based stories.

“We follow a scientific process of data collection in the field similar to ethnographic documentary,” they note. “We treat ‘B Roll’ as a primary rather than ancillary source of footage, and juxtapose it against performative actions on the landscape.”

Beavers and Rettmer measured the Votnajokull Glacier with tape, created compositions of ice forms with red surveying stakes, drew in the snow with foot tracks, and performed rituals in geothermal caves. Their characters at times overcome the physicality and vastness of the landscape—other times they are subsumed by it. Their work integrates images of field-based video with 3D modeling, complicating what the viewer believes to be the site of the mythology. The technology then achieves what the human cannot: an omniscient if incomplete perspective on the site of the artists’ stories. This placement allows the viewer to believe in these new stories as myth and origin.

For both Beavers and Rettmer, artistic processes deal with site-specificity and location. Rettmer’s video works respond to site structure and context, using these situations as foundations for creating symbolic human narratives. Beavers utilizes site as a point of departure for investigating human and environmental histories as they are tied to place. Seydisfjordur, Iceland, provides a rich context for formulating narrative around human origins, scientific history, and contemporary notions of gender identity and performance.

Taken in summation, the exhibition is a collection of visual sagas. The exhibition inserts structures of the Icelandic landscape into the gallery, employing construction tactics of theater set design and installation art as curatorial methods. The video works rely on symbolism, gesture, and archetype to fulfill an ethical narrative. Sculptural pieces act as “field kits” that become archives of site, cataloging and making available raw video footage in the gallery space. Viewers of the exhibition have the opportunity to interact with the archive of footage on a small monitor, an action that democratized the process of image and meaning-making. The spaces of monumental landscape, digital modeling, and the white cube gallery collide and create a slippage within which the viewer experiences the birth of a new mythology.