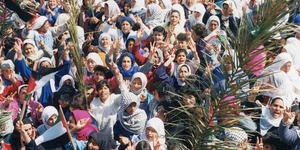 In honor of International Women’s Day, join the Middle East Initiative (MEI) and Just Vision for a screening of the documentary film Naila and the Uprising on Thursday, March 7.

Synopsis: "When a nation-wide uprising breaks out in 1987, a woman in Gaza must make a choice between love, family and freedom. Undaunted, she embraces all three, joining a clandestine network of women in a movement that forces the world to recognize the Palestinian right to self-determination for the first time. Naila and the Uprising chronicles the remarkable journey of Naila Ayesh whose story weaves through the most vibrant, nonviolent mobilization in Palestinian history – the First Intifada in the late 1980s.

The screening will be followed by a panel discussion with Professor Erica Chenoweth of Public Policy at Harvard Kennedy School and a Susan S. and Kenneth L. Wallach Professor at the Radcliffe Institute for Advanced Study, and Just Vision's Executive Director, Suhad Babaa, and MEI Director, Hilary Rantisi. This event is co-sponsored by the Program on Negotiation at Harvard Law School, the Program on Law and Society in the Muslim World at Harvard Law School, the Religion, Conflict, and Peace Initiative, and the Committee on the Concerns of Women. For more details, visit the MEI events page or contact Maura James maura_james@hks.harvard.edu.