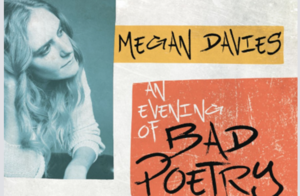 Megan Davies, originally from Harrisburg, Pennsylvania, is an alt/pop singer-songwriter based in Nashville, Tennessee. During the summer of 2013, Davies began uploading acoustic covers and mashups to YouTube—collaborating with her sister Jaclyn and other artist friends in Nashville. Since then, her creative stylings have garnered her more than 163 million views and 1.1 million subscribers.
Although Davies enjoys producing covers and mashups, her passion lies in writing and performing original music. Her unique sound has been influenced by a combination of commercial pop, indie folk, and experimental rock. Her debut original EP, Bad Poetry, is available now. She performed the EP live across the country this fall, opening 19 shows for YouTube heavyweights Boyce Avenue.
In April 2016, Davies was the featured artist for the Spotify curated playlist “Acoustic Covers,” which received global visibility. Her songs on Spotify maintain more than 2 million listeners per month. In June 2015, her three-song mashup “See You Again/Love Me Like You Do/Sugar” reached no. 1 on the U.S. and Global Spotify Viral 50 charts. The Coffee House station on XM Radio voted the cover of Lorde’s “Royals,” performed by Davies and fellow artist Emily Hackett, the best cover song of 2013.