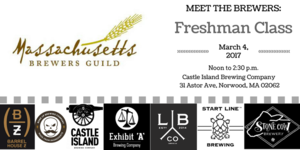 Seven of Massachusetts’ youngest breweries will be featured at the Mass Brewers Guild’s Meet the Brewers event, highlighting freshman brewers from across the state.

Tickets will be limited to 70 people and guests will be broken up into groups of ten upon arrival. Each group will then have ten minutes with each brewer to enjoy a sample, ask questions and hear the story behind the beer before rotating to the next brewer.

The roundtable style event aims to foster learning and education of the brewing process and inspire deeper connections between brewers and craft beer lovers.

Meet the Brewers: Freshman Class will take place at Castle Island Brewing Co., 31 Astor Ave, Norwood, Mass., on Saturday, March 4 from noon to 2:30 p.m. Tickets are $35 and all proceeds will benefit the Massachusetts Brewers Guild. Since 2007, the Massachusetts Brewers Guild, has worked to promote craft brewing and protect the interests of craft brewers across the Commonwealth.