Meet the Author: Most Dope: The Extraordinary Life of Mac Miller 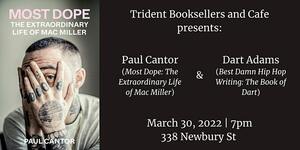 Join Paul Cantor (author, Most Dope: The Extraordinary Life of Mac Miller) in conversation with Dart Adams at Trident Booksellers and Cafe.

The book is the first biography of the celebrated rapper Mac Miller, who passed away tragically in September of 2018 at the age of 26. Through dozens of interviews with Miller's closest friends and collaborators, careful, meticulous research, and Cantor's own wellspring of knowledge about music and the music business, readers ride shotgun through the rapper's rollercoaster life, gaining access to an intimate, detailed portrait of a complex artist who achieved his life's ambition, only to be undone, tragically, by his own personal demons.

Paul Cantor is a writer whose work has appeared in the New York Times, New York Magazine, Rolling Stone, XXL, Esquire, Billboard, MTV News, Vice, FADER, Complex, and elsewhere. Born and raised in New York City, he began his career as a music producer and is now among the most authoritative voices in music journalism. In nearly two decades documenting hip-hop culture, he has interviewed and written about luminaries such as: J. Cole, Kendrick Lamar, Nicki Minaj, 50 Cent, the Wu-Tang Clan, Logic, Common, Scarface, Wyclef, Damon Dash, Young Jeezy, M.I.A., Action Bronson, and Suge Knight, among others.

Dart Adams is a journalist, historian, researcher and an author from Boston who has previously written for the Boston Globe Magazine, Boston Magazine, Bay State Banner, NPR, Complex, Mass Appeal, and Okayplayer. He's the author of "Best Damn Hip Hop Writing: The Book Of Dart" and the forthcoming "Instead We Became Evil: A True Story Of Survival & Perseverance."