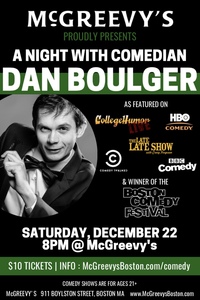 McGreevy’s presents a Saturday night with comedian Dan Boulger, who has been featured on The Late Late Show, BBC, HBO, and winner of the Boston Comedy Festival! Hosted by Brian Higginbottom.

Head to mcgreevysboston.com/Comedy for tickets!

Get tickets fast this will sell out!