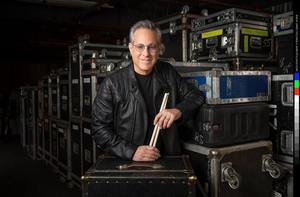 Due to construction delays, the Max Weinberg show on October 16th has been moved to Laugh Boston. We apologize for any inconvenience this change may cause. Ticket holders have been notified via email, and have been given the option of keeping their tickets and attending the show at the new venue or receiving a refund (store credit or in full). Ticket holders must notify us at bostonconcierge@citywinery.com of their decision by October 11th, otherwise tickets will be turned into store credit and not honored at the new venue.

Please feel free to reach out if you have any questions or concerns.

A truly interactive experience, Weinberg invites the audience to create in real time the set list he and his crack four piece group will play that night. Performing songs from the glory days of rock and roll your guests get to choose from a video menu of over 200 songs-- everything from the Beatles to the Stones to Bruce and The E Street Band’s biggest hits—and hear the group play ‘em the way they want to hear them played!

That’s right—the crowd gets to yell out their choices and Max plays them! This unique approach is fun and satisfying. How many times have you attended a show where you yearned to hear your favorite performer play your favorite song? With Max Weinberg’s Jukebox your dream will be realized.

Weinberg, the driving rhythmic force propelling The E Street Band for 43 years, is also known to millions of fans for his 17 year stint as the bandleader and comedic foil to talk show host Conan O’Brien and is the only musician in history to make the leap from a starring role in one of the world’s iconic rock groups to leading his eponymous band on NBC’s “Late Night” and “The Tonight Show”.

And if that wasn’t enough Weinberg managed to do both gigs simultaneously from 1999-2009. Throughout his 50 year professional career Weinberg has played with some of the biggest and most diverse names in music-— James Brown, Paul McCartney, Bob Dylan, BB King, Tony Bennett, Ringo Starr, John Fogerty, Stevie Winwood, Sheryl Crow—even Isaac Hayes performing his legendary “Shaft” with a 30 piece orchestra Max conducted on the Late Night broadcast.

In 2009 Bruce Springsteen and The E Street Band performed the halftime show at Super Bowl 43 to the largest audience ever recorded for that event—over 100,000,000 people. Weinberg also has the distinction of being the drummer on the two biggest selling rock albums in history—Bruce Springsteen’s “Born In The USA” and Meatloaf’s “Bat Out Of Hell”.