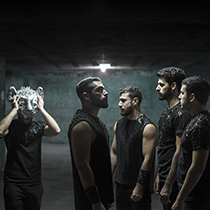 Mashrou' Leila is a five-strong indie band based in Beirut. Born out of a late night / early morning jam session at the American University of Beirut, Mashrou' Leila (whose name roughly translates to Overnight Project) fill their live performances with some of the most bittersweet ballads and raucous anthems you're likely to hear.
Their rousing, sensual electro-pop anthems about political freedoms, LGBT rights, race, religion and modern Arabic identity have challenged the status quo of the Middle-Eastern pop industry. Mashrou' Leila have won fans worldwide, and were the first Middle-Eastern artists on the cover of Rolling Stone.
The band has self-released four albums to date. Their most recent, Ibn El Leil (2015), launched at the Barbican and simultaneously televised by MTV Lebanon, brilliantly reimagines the vibrant sound of contemporary Beirut with guitars, drum machines, samples, razor-sharp violin and magnetic frontman Hamed Sinno's mercurial voice.