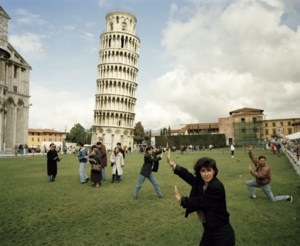 See the incredible Martin Parr exhibit at the McMullen Museum of Art.

Martin Parr (born Epsom, United Kingdom, 1952) is a photographer whose work evinces a global sensibility presented with the closely observed, precise detail of the local. His images underscore how global continuities diminish distinctions among local cultures. This is Parr’s first wide-ranging museum exhibition in the United States with over 135 works and an extensive selection of photobooks on display.

Martin Parr: Time and Place features at its core a career-spanning selection of Parr’s Irish photographs, which describe the radical evolution of Ireland over the last four decades and the major themes of his work—social class and consumption, curiosity and humor, humanity and its predictable idiosyncrasies. Photographs from other series, Autoportraits, The Last Resort, Small World, and The Cost of Living—made in Europe, North America, the Middle East, Africa, and Asia—demonstrate how Parr developed a powerful vocabulary of visual and conceptual ideas informed by overlapping feelings of familiarity and alienation, and instincts that are anthropological as well as artistic.

Working in the lineage of documentary photographers Walker Evans, Bill Brandt, Robert Frank, and Lisette Model, Parr often engages in cultural critique that is humorous, affectionate, ironic, or biting depending on the viewer’s perspective. Finding productive models in commercial and journalistic photography as well as fine art, Parr distinguishes himself from fellow ironists by introducing bright, saturated color to documentary practice. The early black-and-white work in Time and Place highlights the important role that color plays in Parr’s later photographs and emphasizes how his style and vision is more complex, and less defined by color than viewers might expect.