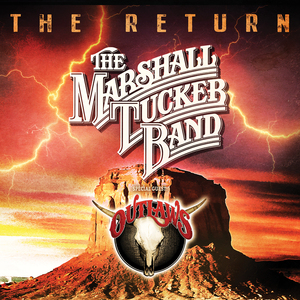 The Marshall Tucker Band came together as a young, hungry, and quite driven six-piece outfit in Spartanburg, South Carolina in 1972, having duly baptized themselves with the name of a blind piano tuner after they found it inscribed on a key to their original rehearsal space — and they’ve been in tune with tearing it up on live stages both big and small all across the globe ever since. The band’s mighty music catalog, consisting of more than 20 studio albums and a score of live releases, has racked up multi-platinum album sales many times over. A typically rich MTB setlist is bubbling over with a healthy dose of hits like the heartfelt singalong “Heard It in a Love Song,” the insistent pleading of “Can’t You See” (the signature tune of MTB’s late co-founding lead guitarist and then-principal songwriter Toy Caldwell), the testifying “Fire on the Mountain,” the wanderlust gallop of “Long Hard Ride,” and the explosive testimony of “Ramblin,’” to name but a few.
For The Outlaws, it’s always been about the music. For more than 40 years, the Southern Rock legends have celebrated triumphs and endured tragedies to remain one of the most influential and best-loved bands of the genre. Formed in Tampa in 1972, The Outlaws – known for their triple-guitar rock attack and three-part country harmonies – became one of the first acts signed by Clive Davis (at the urging of Ronnie Van Zant) to his then-fledgling Arista Records. The band’s first three albums The Outlaws, Lady In Waiting and Hurry Sundown – featuring such rock radio favorites as ‘There Goes Another Love Song’, ‘Green Grass & High Tides’, ‘Knoxville Girl’ and ‘Freeborn Man’ – would become worldwide gold and platinum landmarks of the Southern Rock era.
FOR HANDICAP ACCESSIBLE SEATING, PLEASE CALL THE INDIAN RANCH AMPHITHEATRE AT 508.943.3871
No coolers, beach chairs, large bags or backpacks allowed into the venue. Small purses are acceptable. If you are bringing in beach towels and/or other items for the beach, a clear plastic bag is acceptable. No food or drinks with the exception of a sealed bottle of water. Shirts and shoes required.