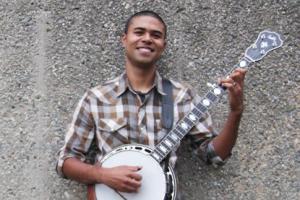 Mark Whitaker is a banjo-wielding singer/songwriter from Boston, MA. Shaped by years of narrowly escaping threats from hostile banjo naysayers, Mark’s innovative playing style is sure not to offend, and likely to be enjoyed. His music draws from a range of influences including folk, blues, pop, and bluegrass. With rich vocals and thoughtful lyrics, Mark’s songs offer a fresh and introspective take on everyday emotions, as well as heavier subjects like crisis, heartbreak, heartburn, and heart repair.

Originally from Columbia, MD, Mark's musical life began with 10 years of classical piano, which provided him with a strong foundation for his eventual interest in guitar, bass, and ultimately banjo. He attended Earlham College in Richmond, IN where he played in a 7-piece funk band, a jazz quartet, and various folk groups. He earned his B.A. in Philosophy in 2002 then promptly moved to Boston to immerse himself in the rich music scene it had to offer. Once in Boston he soon began playing with local artists including Jess Tardy and Noam Weinstein. He was also a founding member of the acoustic instrumental trio Hickory Strings, of which he was a member from 2005 through 2011.

In 2011 he was the winner of the Deering Banjo Contest put on through the Tony Trischka School of Banjo. In 2013 he was awarded an Iguana Fund Music Grant through Club Passim. He was named favorite Male Songwriter, Banjoist, and Duo (w/ Eva Walsh) for the 2014 Redline Roots Awards. He is an active banjoist in the Boston music community and regularly works with other artists as an accompanist and recording artist. In addition to his own project he also plays banjo with the modern bluegrass band, The Whiskey Boys.

The 2014 release of his debut album "Nowhere to Land" features 12 original songs which showcase the diversity of his background all the while maintaining a coherent sense of theme. Much like (and inspired by) The Punch Brothers, his music is delivered via the texture of traditional bluegrass (banjo, fiddle, mandolin, and upright bass) but imposes no restrictions on the styles of music that can be explored with that instrumentation.

Hayley Sabella is a singer-songwriter / local farmer / earnest truth-seeker / independent woman / dork, who originally did her thing in her hometown of Plymouth, Massachusetts and is now doing her thing in other places, too.