Marillyn Hewson, Chairman, President and CEO of Lockheed Martin is the 2020 International Executive Of The Year 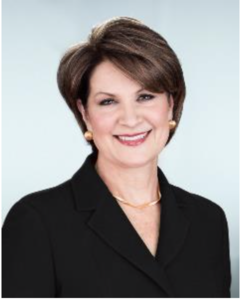 The Executives’ Club of Chicago has named Marillyn Hewson, Chairman, President and CEO of Lockheed Martin Corporation, our 2020 International Executive of the Year. Join us June 4 to honor the leader whose company’s market capitalization has tripled since she became CEO in 2013.

In 2019, Hewson was listed as one of the “100 Most Influential People in the World” by TIME Magazine, and ranked No. 1 on FORTUNE’s list of the “50 Most Powerful Women in Business” for the second year in a row. Former U.S. Commerce Secretary Penny Pritzker said in TIME, “Marillyn is a living example of how business leaders can drive positive change in their companies and our communities when they take a long-term approach.”

Hewson joined the global security and aerospace company more than 35 years ago as an industrial engineer, and rose through the ranks, holding several leadership positions before being named to the company’s top post. She currently serves on the Board of Directors of Johnson & Johnson, the Congressional Medal of Honor Foundation, the Board of Governors of the USO, and as chair of the Catalyst Board of Directors.