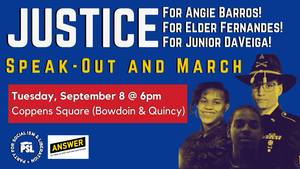 On August 25 Elder Fernandes, a 23-year-old Cape Verdean soldier from Brockton, was found hanging from a tree miles away from the Fort Hood army base where he was stationed. Elder was sexually assaulted and humiliated at Fort Hood, and he’s one of at least 15 soldiers that have died at or disappeared from Fort Hood recently. On September 8, 2002, Angie Barros, a 20-year-old Cape Verdean mother from Boston was shot and murdered by Boston police. No officers were ever arrested or charged for the murder. On April 3, 2010, Junior DaVeiga, a 19-year-old Cape Verdean was killed by BPD while he was visiting a memorial for a close friend off of Bowdoin Street.

In the 18 years between Angie’s and Elder’s deaths, many other Cape Verdeans have been targeted and harmed by the U.S. government that values the profits of the rich more than the lives of the oppressed. Here in Boston, even though Mayor Walsh has traveled to Cape Verde for photo ops, his government arrests, imprisons, kills, deports, and impoverishes Cape Verdeans. Enough is enough!

On September 8 at 6pm, on the anniversary of Angie Barros’ murder, join us at Coppens Square (Bowdoin & Quincy Street) to demand:

1. Justice for Angie Barros, Junior DaVeiga, and all victims of police violence! Reopen the cases and charge the officers!

2. Justice for Elder Fernandes! Open an independent investigation into Elder’s death and shut down Fort Hood!

3. Release all Cape Verdean and other immigrants in ICE detention! Stop the deportations!
4. Clemency for Nichole Fernandes! Fernandes, the only Cape Verdean woman serving a life sentence without parole in this country, has already served 18 years.