MAKO: Run For Your Life Tour 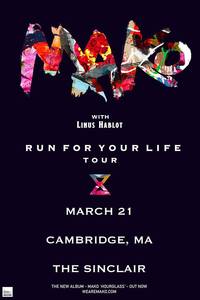 To hear MAKO now is to witness them at a creative crossroads, a trip four years in the making for frontman/producer/songwriter/vocalist Alex Seaver. Following their rapid rise, MAKO now tackle a new sonic challenge via their debut album Hourglass, which was released December 9, 2016 via Ultra Music.

A stark shift in musical aesthetic, Hourglass sees MAKO graduating beyond their early beginnings in dance music and reaching far into the spheres of pop, indie rock and beyond. The album, created over two years, reflects an equal amalgamation of the myriad influences from which Seaver draws as well as their deep-rooted experience on the road, in the studio, on the stage and in everyday life. All together, Hourglass is the latest and most robust chapter in the MAKO storyline, a growing tale told up to date in the album’s 12 tracks. Still, to understand Hourglass requires a deep dive into MAKO’s makeup and creative dynamic.

To hear it told from inception, the history of MAKO is much like listening to the unfolding of a modern-day legend. Seaver, a multifaceted, classically trained musician and gifted graduate of the lauded Juilliard School in NYC, moved to Los Angeles to pursue a career in film composing where he met Logan Light by way of their fathers, who were once college roommates. A devotee to the indie rock circles of the day, Light was making waves in his own right as he began to master the DJ decks, gaining enough momentum to attain opening slots for EDM giants Tiësto and Avicii. Following a storied trip to the EDM mega-festival Electric Daisy Carnival in Las Vegas, where Seaver was thrown headfirst into the electronic music world, the two friends formed MAKO.

In no time, MAKO became one of the hottest acts in the electronic music world. Their first release, “Beam,” amassed more than 25 million online views and streams. Between their own remixes and work for others they amassed multiple Hype Machine #1’s. SiriusXM quickly jumped on board, anointing them “the next big thing,” and the rest of the electronic musical community followed suit. MAKO have since worked alongside many top artists, including Avicii and Steve Angello. Additionally, Seaver has scored music for and worked alongside League Of Legends/Riot Games on a variety of projects, as well as has scored for independent film, television and several commercials.

On the touring front, MAKO have played high-profile festivals, including Coachella, Lollapalooza, EDC Las Vegas, TomorrowWorld, Electric Forest, Electric Zoo, and more, in addition to headlining their own club tours. Hourglass, then, is the next progression.

Sewn deep into the DNA of Hourglass lies a distinct hybrid musicality layered with MAKO’s diverse background and unique interests stepping forward to present a new, consolidated sound. Dig into “Let Go of the Wheel,” where a serene guitar-and-piano combo pair beautifully with Seaver’s love-hued lyrics which explode as he sings of simpler times and future days. “Real Life” shines through powerfully and showcases an endearing take on indie rock sensibilities.

The album also features their 2015 breakthrough single “Smoke Filled Room,” which soared into pop and dance radio airplay charts via continuous support on SiriusXM’s BPM and iHeartRadio’s Evolution channels and landed at #1 on the Dance Airplay chart. “Wish You Back” features Kwesi and offers a touching, self-reflective tale of love lost built over a cinematic arch, while Dutch house duo The Him offers a bouncy, alternate take of the track with club-friendly charm and serves as a bonus track on the album.

Other standout tracks include “North Dakota,” a stunning and unique soulful ballad about finding solace outside of the big city; “Run for Your Life,” which is three minutes of pop genius produced with the help of Seaver’s Norwegian friend, Rat City and features a guest vocal from Natalola; and “Craziest Day I Ever Had,” a hilarious tale of misadventure in Los Angeles. The album closes with “Our Story (Hourglass Finale),” an anthemic rework of MAKO’s ode to childhood innocence.

“The biggest challenge was staring at a completely blank canvas and thinking, ‘I can fill this with literally anything. What do I want to say?’” says Seaver of Hourglass. “To really develop a voice was the most challenging aspect of this project.”

While the beginnings of Hourglass date back to 2014, it was a performance at this year’s Lake George Music Festival (August 2016) that helped realize the group’s artistic potential. Here, MAKO collaborated with the festival’s 40-piece classical orchestra to create unique arrangements of the duo’s original music. The result: The lush complexities and beefy layers of Seaver’s professional training in classical music meshed beautifully the modern, the edgy, and the electronic, as heard fully throughout Hourglass.

With Hourglass, MAKO bid farewell to their former style of dance floor burners and hands-in-the-air beats with an evolved sound reaching toward the vast beyond: sincere, story-based songwriting; cinematic arrangements and orchestral instrumentation; and indie rock stylings the size of stadium anthems, all while retaining a twist of electronic goodness. Ultimately, its wide-reaching composite draws listeners into the duo’s personal story with glimpses into their future sound, while remaining organically MAKO.

“We hope the people who have been along for the ride with us will love the direction we've chosen,” says Seaver. “We put our hearts and souls into this. We’re going the way we want to go.”