Make It New with Baba Stiltz 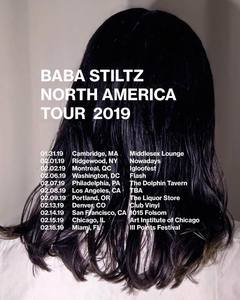 The only artist to release on Sven Vath’s Cocoon with the infectious “All I can (about you) ” and OVO, Baba Stiltz is a contemporary force to be reckoned with. For the last few years, he's been making highly idiosyncratic dance music with pop lubed melodies and a notion for youthful exuberance. Baba has afforded himself an uncommon amount of creative freedom, and often seems unafraid to step outside the scene's conventions.

From his base in Stockholm, working alongside artists who share his love for the left-field—Kornél Kovács, Axel Boman from Studio Barnhus, Samo DJ and artists like Yung Sherman from the hip-hop collective Sad Boys. Stiltz is now imbedded in the international dance music community, playing clubs and festivals around the world from Fabric to Berghain. From writing albums full of downbeat soundscapes (2014's Total), releasing radio accessible tracks such as (this year's "Can't Help It"), or writing a disco-house burner for The Trilogy Tapes (last year's "Keep It Lit"). His aesthetic is hard to define, but he works on a scale with tender sincerity at one end, and great humour at the other. Dropping his debut EP on XL recordings in early 2018 after a break out year featuring an acclaimed podcast for R.A and a 4 page spread in Dazed & Confused.