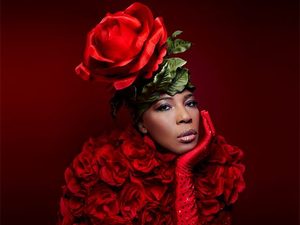 Rubies hold a special place amongst the world’s rarest natural treasures. The most sought-after of the corundum family, the gemstone’s crimson hue instantly catches attention—as if extracting passion from the earth itself and crystallizing it in mineral form. Similarly, Macy Gray occupies a rare space in the canon of modern music.

That unmistakable rasp, unshakable grasp on soul, and funky spirit ensured her status as a 21st century icon since her arrival with the triple-platinum How Life Is in 1999. Selling over 25 million total albums globally, winning a GRAMMY® Award and two BRIT Awards, collaborating with everyone from Ariana Grande to Galactic, and enchanting fans all over the world, her voice has consistently resounded throughout pop culture. Eternally enamored and enthralled with her voice and presence, a devout fan base that transcends genres, generations, and creeds celebrates her work—album after album and tour after tour. Most recently, 2016’s Stripped earmarked a creative high point, garnering unanimous acclaim from Vogue, Vice, and many more. At the same time, she remains a force of nature on tour, selling out venues in nearly every corner of the globe two decades into her storied career. Macy’s talents resound beyond music as well. She starred in Tyler Perry’s Black Reel Award-winning For Colored Girls and would grace the screen everywhere from Brotherly Love and Cardboard Boxer to NETFLIX’s hit Fuller House. Moreover, she made a now legendary appearance in Training Day alongside Academy® Award winner Denzel Washington—one of many on-screen hallmarks.

Now, her tenth full-length album, RUBY [Artistry Music/Mack Avenue], reaffirms and reasserts that signature rarity millions continue to treasure. “I love the gem ruby,” she explains. “It’s so regal. I really wanted a title that would stick. The stone is also red of course, which is my favorite color. It’s rich and has history. It’s classic—and so is this album.”