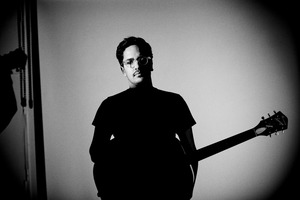 Raised in the southwest London suburb of New Malden, indie folk singer/songwriter Luke Sital-Singh released his first EP, Fail for You, in late 2012. Produced by veteran Irish producer Iain Archer (Snow Patrol, Jake Bugg), the four songs had a haunting, intimate quality that drew comparisons to Bon Iver and Jeff Buckley and earned him considerable airplay in the U.K. Sital-Singh released a second EP in the spring of 2013 called Old Flint, which opened the doors to several tours, key spots on the U.K. festival circuit, and eventually landed him a deal with British major Parlophone Records. Tornados, his third EP and first for Parlophone, found him again working with Iain Archer and was released in late 2013.
The EP found Sital-Singh expanding his usually spare sound with the introduction of a full complement of backing musicians, bringing a newfound complexity to his music.
He then appeared on the BBC Sound of 2014 long list, and soon after confirmed the details of his debut album, The Fire Inside, which was due for release midway through that year.
Two years later, Sital-Singh had split from his major-label and headed out to record what would be his sophomore album.
Heading to the remote Attica Audio in Donegal, Ireland, with producer Tommy McLaughlin (Villagers), Sital-Singh stripped back everything, being joined by just a small backing band to help deliver the personal and reflective 2017 release Time Is a Riddle.
DOORS: 9:30PM
SHOW: 10:00PM
ADMITTANCE: Seated, General Admission, 21+ Admittance**
**under 21 accompanied by a parent, limit 2 minors per adult
TICKETS: $12 in Advance
No refunds, all sales are final. Tickets may be transferred or exchanged to another attendee by contacting the ticketing agency. Please note that for shows with a 21+ admittance policy, or to consume/be served alcohol, we require: a valid State ID License or government issued Liquor/ID Card, Passport or US Passport Card, or Military ID. Minors may be admitted when accompanied by parent or legal guardian, up to 2 minors per adult.