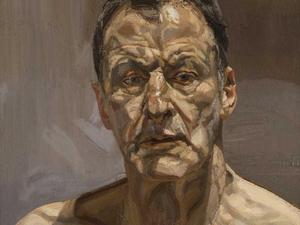 Due to the ongoing public health crisis, the Museum of Fine Arts, Boston, will remain closed through June 30, 2020. The MFA originally closed the evening of March 12, and has canceled all live public programs and internal special events through August 31. The exhibition and programming schedule is currently under evaluation and, when possible, an announcement will be made regarding the future calendar.

A modern master turns his unflinching eye on himself

“Lucian Freud: The Self-Portraits” charts the artistic development of the renowned British figurative painter through the unique lens of self-portraiture. Best known for his portraits of his acquaintances, Lucian Freud (1922–2011) painted his subjects with compositional ingenuity, technical virtuosity, and a critical eye, and was no less rigorous when depicting himself. Freud returned to self-portraiture repeatedly over almost seven decades, creating a body of work that stands as one of the most sustained achievements of his career.

With more than 40 works on canvas, paper, and etching plate that span the 1940s to the early 21st century, this exhibition assembles a lifetime of self-portraits. They trace the evolution of Freud’s technique and style: from his linear and graphic early works to the fleshier painterly style that became the hallmark of his later output. They also show a life’s journey, from young boy to old man, in what was effectively an ongoing study of the process of aging and the changes it inflicted on his own physical form.

Freud’s depictions of himself place him in a lineage of artists, from Dürer to Rembrandt onward, who took self-portraiture to new heights. “Lucian Freud: The Self-Portraits” is singularly enriched by being on view at the MFA, in the context of its collections containing works by many artists from whom Freud drew his inspiration.