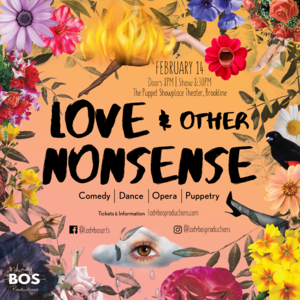 Lady BOS Productions presents LOVE AND OTHER NONSENSE, an interdisciplinary investigation of love in all its forms. For most of human history, love was considered a distraction from the practical demands of survival. Marriage was an economic decision made with the intent to preserve and bolster communities of families. Love was something to be discovered between two partners throughout marriage, not prior to engagement, and too much love was seen as a threat to the institution of marriage. The Ancient Greeks spoke of love as a type of insanity, while in the Middle Ages, the French literally defined love as a derangement of the mind. Classic love stories such as Romeo and Juliet were not treated wistfully: in reality, they were cautionary tales of the dangers of love, told with the intent to dissuade young people from falling victim to love.

​However, in the late 18th century, after a series of many major economic and social shifts, mankind entered the Age of Romanticism: people demanded a right to personal happiness, and they believed love to be a key factor. Today, we live in an era of swiping for soulmates… or in the very least a highly “grammable” relationship. With the Age of Romanticism, we evolved as a species into welcoming the luxury of romantic love. Now in the Age of Tinder, have we evolved beyond the inconvenience of love?

Through comedy, dance, puppetry, and opera, the artists of LOVE AND OTHER NONSENSE chronicle the history of love while exploring the nuances and complexities, joys and sorrows, and, of course, the pure nonsense of this overwhelmingly powerful emotion.

14/02/2020 20:00:00 14/02/2020 22:00:00 15 Love & Other Nonsense Lady BOS Productions presents LOVE AND OTHER NONSENSE, an interdisciplinary investigation of love in all its forms. For most of human history, love was considered a distraction from the practical d... Puppet Showplace Theatre, Brookline, MA 02445 Organizer Organizer e-mail false DD/MM/YYYY Reddit